DILHORN is a stately home in Western Australia. It is located on Bulwer Street in the inner city suburb of Highgate. It was built by Soldier Architect Joseph John Talbot Hobbs in 1897. (Image copyright State Heritage Office)  Listen to the episode on Apple Podcasts:

A great image of the towers of Government House, Perth circa 1864. In the foreground are members of the Western Australian Volunteer Force and their ladies at a soiree. Unfortunately not much uniform  detail can be made out but the WAVF was primarily raised in Perth, Fremantle and Pinjarra. We’re compiling some fantastic pre-federation images which will be posted in due course. I am a particular fan of the uniform of the Pinjarra Mounted Volunteers which was considered the most elegant in the colony. 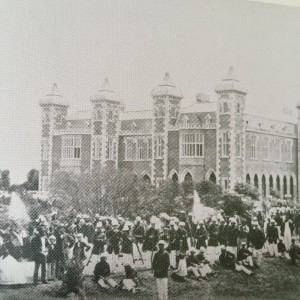 I was recently walking around Sydney on a rainy day when I came across a ships cannon. Obviously I was very excited because it’s not something you see everyday. It was sitting in Macquarie Place, at the corner of Bridge and Loftus Streets near Circular Quay.

The item in question is a 6 pound ships cannon reputed to be from a British vessel, HMS Sirius, the flagship of the ‘first fleet which sailed to Australia in 1788. I must say, before I go any further I find it very difficult to not think of Harry Potter every time I say the word Sirius. I’m struggling not to call the ship HMS Padfoot. That’s one for all the Harry Potter nerds out there.

HMS Sirius started it’s life in 1780 as HMS Berwick a merchantman serving in the latter days of the American War of Independence. In 1786 it’s name was changed to Sirius and re-commissioned for the voyage to Australia. Sirius was a 6th Rate, a type of small warship which could carry up to 30 guns. It had a crew of 160 and was 30 metres in length. It was lightly armed for this voyage with 10 guns; 4, 6 pound long-cannon and 6, 18 pound carronades. A carronade was a basically a giant shotgun. Guns and cannon in the age of sail were classified according to their pound rating: theoretically, this was the weight of a single iron shot fired by that bore of cannon. A 6 pounder fired a 6 pound ball, a 12 pounder a 12 pound ball etc. Be warned, This story will be a cocktail of metric and imperial references. So get ready.

Sirius was also transporting 10 extra guns which were packed away for use in the future Australian colonies. For those unfamiliar with how ships cannons of this era worked the basic procedure for firing one was:

A wet swab, which looked like a giant cue tip, was used to mop out the barrel, to extinguish any burning embers from a previous shot which might set off the next charge. Then gunpowder usually in a cloth or paper cartridge with holes poked in it was packed down the barrel and a cloth wad pushed in tight behind it. Next a projectile was rammed in, again usually an iron ball, followed by another cloth wad to prevent the ball from falling out if the ship rolled or the barrel was depressed. Because like all of us even gun barrels get depressed sometimes. The barrel sat on a carriage with wheels which was then ‘run out’ — men heaved on ropes and tackles until the gun barrel protruded out of a hole in the side of the ship called a ‘gun port’. This took quite an effort on the part of the gun crew because the total weight of a large cannon could be over two tons, a 6 pounder by contrast weighed about 700kg, but still a dangerous weight to have rolling around a ship. Gunpowder was placed in a cavity in the breech of the gun called a ‘touch hole’ and to fire the gun this was ignited using either a trigger mechanism that contained a flint, like that on a musket or with a stick holding a slow burning fuse called a ‘linstock’.

It fired several types of ammunition. These were designed to do 3 things, kill the crew, disable the ship or destroy it. In the broadstrokes they were either small balls, large balls, chains or red-hot heated shot. There was also my favourite – a Double shot, and in todays parlance it would be 2 espresso coffees fired simultaneously, but in the days before espresso it was actually two round shot loaded in one gun and fired at the same time. Very destructive.

HMS Sirius was one of 11 ships comprising what was to be called ’The First Fleet’. It’s purpose was to establish a penal colony in New South Wales on land claimed for the British crown by Captain James Cook.

It was made up of 6 transports carrying convicts; Alexander, Charlotte, Friendship, Lady Penryhn, Scarborough and Prince of Wales, 3 store ships: Borrowdale, Fishburn and Golden Grove and 2 British naval vessels, His Majesties Armed Tender Supply and His Majestrys Ship Sirius. Sirius sailed under the command of Captain John Hunter and carried on-board Captain Arthur Philip who would be the first governor of the new colony. The Fleet left Portsmouth England on the 13th of May 1787 and arrived at Botany Bay on the 21st January 1788. It was decided that Botany Bay wasn’t suitable to establish the settlement, so Port Jackson further down the coast was selected instead.

Sirius worked hard for the new colony ferrying food, troops and other supplies. It was on one such mission that she came to a sad end, unfortunately running aground off Norfolk Island on the 7th of March 1790. The cannon you see in Macquarie Place is said to be one of those recovered, between 1790 and 1792 and returned to Sydney.

In 1907 it, along with a salvaged anchor, (one of several Siruis carried) were established in Macquarie Place.

The cannon and its carriage have been restored by the Australian National Maritime Museum and the City of Sydney, as part of its Public Art program to maintain and preserve the City’s artworks and historical monuments. There are several places in Sydney named in honour of HMS Sirius, including Great Sirius Cove which is usually called ‘Mosman Bay.’ Another piece of trivia is HMS Sirius itself was named after the brightest star in the night sky. It comes from the ancient Greek Serios meaning ‘glowing’ or ‘scorcher’.

If you go and visit Macquarie Place you’ll see a plaque on the cannon which reads: “This gun is believed to have formed part of the armament of the HMS Sirius the flagship of the first fleet, which entered Port Jackson in 1788. The gun was returned to Sydney after the HMS Sirius was wrecked at Norfolk Island in 1790 and used as a signal gun at South Head. This gun was placed here in 1907”

The Sirius cannon is profound link to European settlement in Australia. It is located in a lovely part of Sydney and there are some beautiful colonial era buildings and artifacts located around Circular Quay. There are also amazingly detailed models of the first fleet ships, including His Majesty’s Ship Sirius on display at the Powerhouse museum in Sydney. If you can’t get down there in person you can see them at the museum website powerhousemuseum.com.au, there is also a link to the Sirius page on our own website backyardbattlefields.com

Thanks for downloading, please leave us some feedback on Itunes, for more information and to see some images from the story please visit us at backyardbattlefields.com

(The musical audio featured in the podcast was – The Bushwackers Band – Shore of Botany Bay, Royal Navy – Heart of Oak and the Harry Potter theme )

This story can be downloaded from: